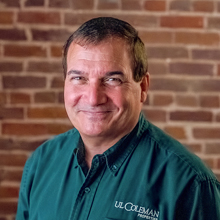 Originally from Shreveport, Jeff Roach started his career with the U. L. Coleman Companies in 1991 as the Maintenance Supervisor at Chaparral Apartments and received his HVAC Certification from the Ayers Institute.

He was later promoted to Assistant Maintenance Director for the entire multi-family portfolio and became the Maintenance Director in 2004. Reporting directly to the Executive Vice President, Jeff oversees all of the maintenance supervisors and assistants, ensures the properties are up to make-ready standards and heating and air conditioning units are installed in accordance with local laws, and monitors all HVAC permits. He also heads up safety meetings and assists with troubleshooting when needed.

Previously, Jeff sold real estate, earning his license in 1985. He also has worked for the City of Bossier in the Maintenance Mechanic II position, along with several other positions that have added to his credentials. In addition to his work experience, Jeff graduated with his Master Mechanical License in HVAC in 1997 and completed the Dale Carnegie Training in 2005.